Fund a rare book on the Ramayana 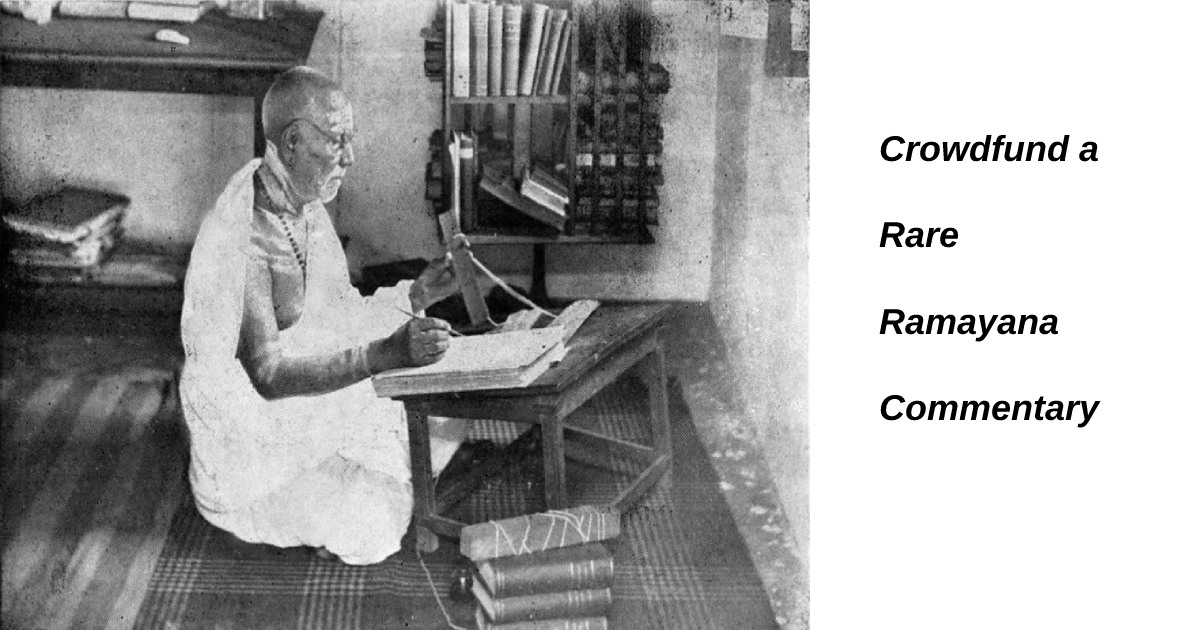 Noted Tamil scholar and researcher U V Swaminathan Iyer’s book, “Kamba Ramayanam, A Commentary” written in Tamil sometime in the 1940s  is a 9 volume magnum opus with a total of more than 10,400 pages. It is a commentary of the 10,000 stanzas of the Kamba Ramayana

The book is said to provide the most comprehensive and the extremely nuanced commentary of the Kamba Ramayana in Tamil. It is the work of a lifetime of searching for the various palm leaf manuscripts of the Ramayana.

The 9 volume commentary written by U V Swaminatha Iyer was published only after his death. Swamintha Iyer passed away  in 1942, and his son Kalyana Sundara Iyer started bringing out the publication in 1949. It took him a total of 10 years to bring out the 10,000 page 9 volume book collection. Now, the book is out of print and copies are not available.

Swaminatha Iyer (1855 – 1942) was a Tamil scholar and researcher who was instrumental in bringing many long-forgotten works of classical Tamil literature to light. His singular efforts over five decades brought to light major literary works in Tamil and contributed vastly to the enrichment of its literary heritage. Iyer published over 90 books in his lifetime

Parthasarathy of Maran publications, is raising funds to the tune of Rs 10 lakhs for the publication of the commentary of the Kamba Ramayanam made by U V Swaminatha Iyer.

Parthasarathy of Maran Publications proposes to print 500 copies of the book at a price of Rs 6,000 per book.

The total cost of the project is around Rs 20 lakhs and they have raised around Rs 10 lakhs so far..

Parthasarathy who heads the Maran publishers are publishers of religious titles and among their important titles are Alwarin Vidhi, Adaikkala Kathaigal and Nammalwar’s Pillai Tamizh.

The publisher, Parthasarathy is also a regular contributor to Tamil religious magazines like Vainavan Kural and Narasimha Priya.

Parthasarathy is also a commentator of the Ramayana and he has begun explaining the Kamba Ramayana based on U V Swaminatha Iyer’s commentaries. He has been giving these talks for the past 18 months, of one talk per week, and it is expected to go on for the next seven years.

The books are sought to be published and printed before the Chennai Book fair which is to be held on March 2022.

- If you fund more than Rs 5000 you could get the 9 volumes of the book. If you are away and if you do not need the book, you can donate it to a library of your choice. Parthasarathy will help you with the selection of the library.

- If you fund more than Rs 1000 you will get an invitation to Parthasarathy’s weekly online meetings (expected to run for the next seven years) where you can listen to his explanation of the commentaries of the Kamba Ramayana.